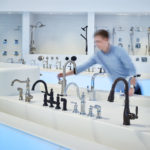 When Moen, the number-one faucet brand in North America, launched a new innovation and design center at Chicago’s Merchandise Mart, they turned to Knack for their VIP gift program.

“Moen is constantly growing and innovating in ways that surprise our customers and the industry. It’s only natural that the next progression in the evolution of this industry icon is a fully immersive and experiential showroom at the MART.”

As the #1 faucet brand in North America, Moen offers a diverse selection of kitchen and bath faucets, showerheads & accessories for residential and commercial applications. In 2018, Moen launched an exciting new innovation and design center within The Merchandise Mart in downtown Chicago to serve as a marquee showcase and allow designers and consumers to see first-hand how Moen shapes and enhances daily experiences with water.

Each of the interactive displays and demonstrations throughout the location would provide visitors with an immersive experience. To commemorate the launch, Moen tapped Knack to match the clean, modern aesthetic of their stunning space with industry VIP gifts.

Moen had provided give-aways at events in the past, but they wanted a higher-end gift solution for this event where their guests would include architects, product designers and key influencers within the design community. 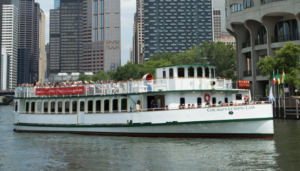 Chicago is legendary for its architecture, so what better place for Moen to celebrate their launch at the Merchandise Mart than a private Chicago River architectural cruise? Famous among visitors and residents alike, the cruise features a detailed narrative of Chicago’s various architectural styles and the stories of the people who designed and built the city. It was against this dramatic backdrop that the event would take place.

While Moen wanted each VIP in attendance to receive a special commemorative gift, they understood that handing out physical gifts on the cruise would prove cumbersome for both the company and the attendees, most of whom had traveled to Chicago for the event. Moen originally planned for guests to fill out a card with their ship-to address which they would hand to a Moen representative when leaving the boat.

For this reason, the “how to gift” was as important to Moen as the “what to gift.”

Moen was looking for a useful and memorable gender neutral gift that would tie in thematically to a launch at NEOCON.   The event had a “gold” theme and the client suggested barware as a place to start.

Additionally, the gifts needed to: 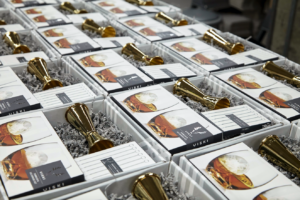 Knack was selected from a pool of 5 potential vendors approached. The custom gold-themed bar gift set created met budget, theme and gender neutral requirements. Moen liked the ability to include the Moen/House of Rohl branding on the message card.  Additionally, a custom cocktail recipe card was produced for the Chicago event, and this same gift was used for an event in Park City and for HQ sales to distribute to select clients.

Most importantly, Knack developed an elegant solution to prevent attendees from having to either fill out forms during the event or carry their gifts off of the boat, back to their hotels, and through the airport to wherever they live.

During the launch event itself, Knack sent emails to each of the VIPs in attendance.  Each email had a custom id embedded in the link that allowed attendees to obtain a free gift just by entering their mailing address.  The unique IDs ensured that each attendee would receive only 1 gift and also allowed us to monitor and report on exactly who had received a gift.

The link pointed to a Moen-logoed web page that thanked them personally for attending and told more of the Moen story.

Through the use of custom IDs, Moen was able to track exactly who signed up for gifts, and when those gifts were received.  And event attendees had exceptional gifts waiting for them when they returned home from Chicago.

We invite you to try their resulting “recipe for success” below!

A moment of mindfulness and gratitude is exactly t

Nearly a year into the pandemic, businesses have n

Loving the rustic spa vibe of this unboxing pic fr

SWIPE >> to see a roundup of our highlights and fu